How Does Unreal Engine 5 Revolutionize The Game Industry? 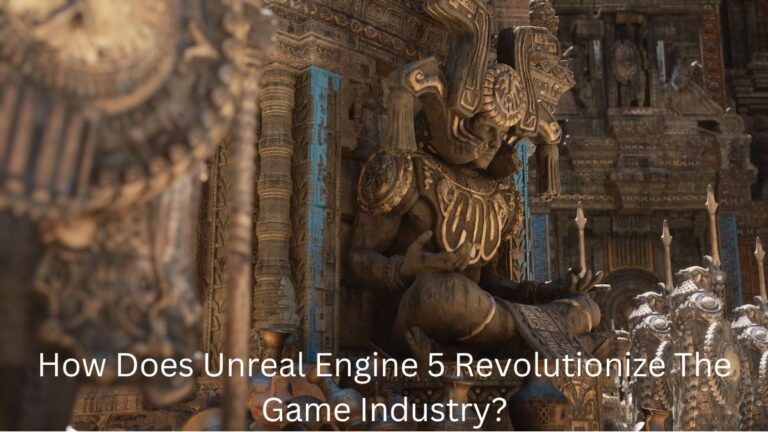 Unreal Engine 5 adds new options and ostensibly streamlines the game development process for large-scale developers. This ease of use, coupled with a vastly improved toolset and numerous time-saving features for developers, could lead to the creation of radically distinct techniques from previous generations. Therefore, numerous leading game development companies are at the forefront of discovering Unreal Engine’s game development potential and employing it to create technically superior and inventive games for the next generation.

Global illumination simulates how light rays reflect off surfaces and is primarily responsible for creating a realistic lighting effect.

Because video games render between 30 and 100 frames per second, game developers have utilized Faked Global Illumination to circumvent technological limitations.

The problem with the above method is that the light map must be readjust whenever the lighting of a scene changes.

UE5 enables accurate global illumination that dynamically modifies the lighting of a scene in response to environmental changes.

The mineral Nanite ensures “infinite geometry.” And while that may sound like the ninth circle of hell to my high school classmates, it means that full-quality assets with millions of tiny triangles can be created or import into Unreal 5 with minimal performance penalties compare to previous versions.

Before Unreal Engine 5, working with objects of this level of detail was challenging. In older engines, there are primarily two workarounds: normal mapping and author LODs or levels of detail. Normal mapping is wrapping a custom, highly detail 2D texture around a less complex object. Consider the face swapper in the Mission Impossible films or the movie Possessor if you desire a lifetime of nightmares.

The Megascans asset library allows developers to populate their game worlds with photorealistic objects. There are over 16,000 assets in the library, including 3D objects, plants, and material surfaces.

Even movies and television shows, such as The Mandalorian and the live-action remake of The Lion King, have utilize these assets. The entire library is freely accessible to developers and is automatically integrate into UE5 for their convenience.

The MetaHumans software is a boon for VFX artists and game developers, as it is difficult to generate humans using CGI.

The MetaHumans app generates lifelike humans with natural hair and clothing in minutes.

Moreover, with an integrate facial and body rig, users can import a MetaHuman model into UE5 and begin animating it immediately.

In the Matrix: Awakens UE5 demo, for instance, only MetaHumans, including the Keanu Reeves model, were utilized.

Epic Games has made the transition from UE4 to UE5 seamless. Any UE4 project can be easily converted to UE5 to take advantage of the engine’s new features. With all of these new features that UE5 brings to the table, players can anticipate an abundance of fantastic video game worlds.

Also read: Why Is The Need For Cross-Platform Games Rising In 2022?

What Is The Function Of The Unreal Engine?

Creating a video game requires considerable effort. Numerous first-person shooter aspects must be create from scratch, including the physics of how bullets move, the music play within the game and the gunshot sounds. It requires a substantial amount of time and effort that would be better spent enhancing the gameplay or the story.

Therefore, the Unreal Engine is so revolutionary. There is no reason for developers to spend time on these trivial details. The Unreal Engine has many features, including realistic physics, sound effects, and customizable backgrounds. All essentials are handled automatically, allowing you to focus on what truly matters when creating a game.

Thanks to the Unreal Engine, thanks to Epic Games will be advantageous if the video game industry experiences significant growth over the next five years. Every game that uses the engine and earns more than $1 million annually pays Epic Games a 5% profit share. The greater the success of games built with the engine, the more Epic Games will benefit.

It is essential to recognize that Unreal Engine is not the only game engine available to developers. Unity is a formidable rival to Unreal. However, major game developers favor Unreal because it supports more realistic graphics. Independent studios and mobile game developers typically use Unity due to its simplicity.

The Unreal Engine For Gaming Outside

Companies utilize the Unreal Engine outside of the video game industry. What Epic Games has create extends far beyond video games; it permits businesses in any industry to experiment with fully programmable and photorealistic virtual worlds. Here are a few non-gaming applications of the Unreal Engine.

The Mandalorian employs the Unreal Engine to generate space and planet backgrounds. This eliminates the need for the production crew to travel to various locations for each episode.

The background is handled by Unreal Engine, so there is no need to travel to a snowy location to film this.

The United Kingdom-based pharmaceutical company C4X Discovery uses the Unreal Engine to simulate how different molecules interact. It is estimate that this will drastically reduce the typical 10 to 12 years require for a drug to reach the market.

Self-driving cars require information on how a human driver would respond to every situation on the road, such as when an idiot runs a red light, and you must do your best to avoid dying horribly. As it is nearly impossible to collect this data in the real world, researchers at the University of Warwick are simulating these scenarios in a secure virtual environment using the Unreal Engine.

It is hard to believe that a video game company has enable these exceptional use cases. This only scratches the surface of the capabilities of the Unreal Engine.

Unbelievably, a video game engine now powers one of the best television shows of the decade and autonomous driving technology.

Unreal Engine 5 provides enterprises with limitless opportunities to advance their businesses via real-time 3D projects involving games, media and entertainment, live events, and simulation. The gaming industry is heavily invest in the development of Unreal Engine 5 because it supports metaverse-integrable, feature-complete projects that complement their existing business models.

A Brief Guide To Luxury Mattresses

Lucky Me I See Ghosts Hoodie