What is Drug Testing, and Explain its Stages and Advantages? 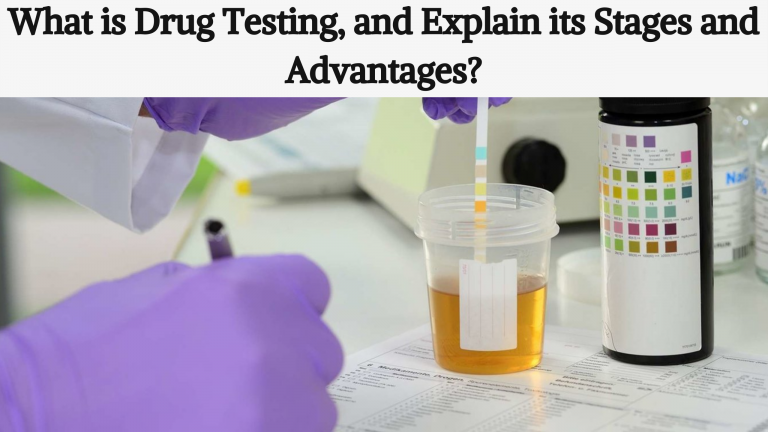 People who have a problem with drugs or alcohol are more likely to deny that they have a problem. One way to show that someone needs help is with a simple drug test. An accurate drug test can indicate if a person is abusing drugs or not, and it can also be used to stop people from abusing drugs in the future. A recovering addict can also stay accountable, avoid relapse, and stick to their health goals with the help of drug testing.

When to Use Drug Testing?

There are a variety of purposes that can be served by drug testing. There are numerous justifications for conducting drug tests, such as the following:

Before a friend or family member agrees to get help for a drug or alcohol problem, drug tests can help them understand how bad the problem is.

Problems start when a loved one doesn’t want to take a drug test, problems begin. During an intervention, a drug test should only be given with the help of a counselor or interventionist who has done this before. After therapy, it might be easier to ask a loved one to take a test.

When used with other treatments, drug testing can be an excellent way to help someone realize they need help and stay honest while they are in rehab and getting better.

There are several different kinds of drug tests available.

SAMSHA stands for Substance Abuse and Mental Health Services Administration. It has been found that there are six main types of drug tests:

What Is the Importance of Drug Testing?

Drug testing programs look for illegal drugs, some prescription drugs, and alcohol. There’s a chance that the exams could:

Random drug testing can help employees who have used drugs as a preventive measure. Many people don’t use drugs because they’re afraid they’ll fail a drug test and lose their jobs.

There are no standard tests, checks, diagnoses, or long-term care for toxicology in a clinical setting. Even without uniformity, different drug tests can be done well at home, work, or school. It was hard to do at-home or remote testing in the past because mail-in labs couldn’t handle samples from far away. This is now changing. More and more labs offer the service of analyzing samples from a distance. Most of the time, drug tests like saliva, urine, and blood tests are used to check for drugs and alcohol.

Blood tests are the most precise and dependable method for determining what is wrong with a patient. Blood samples are harder to change or dilute than urine samples. Because of this, blood tests can give more accurate information about levels of drugs and alcohol, among other things. Some places that help people get off drugs and alcohol give patients remote devices that let them take samples home.

There are several ways to get samples from far away that aren’t very invasive. They get an excellent example from the fingertip using a simple finger-prick method. Some places that help people with addictions also use these tools in person with their patients. Drug tests can be taken directly from patients instead of having them leave the room to pee in a cup, which is what most doctors and nurses prefer.

How To Choose An Online Crypto Poker Site