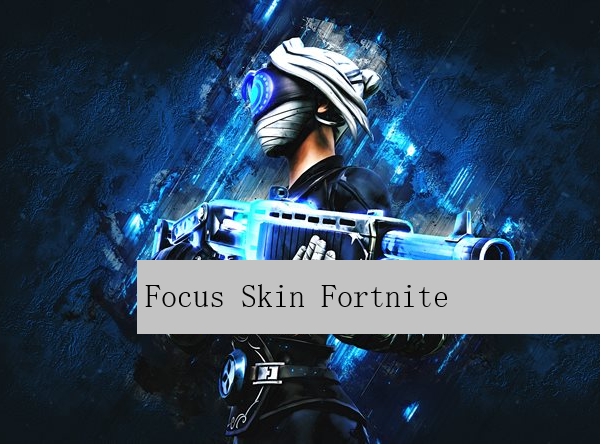 Focus is a Fortnite skin that is extremely rare. It has been released and can be purchased for 1,200 V-Bucks from the Item Shop when it is listed. The Focus Fortnite skin is a Fortnite cosmetic. Epic Games released Fortnite, an online game, in 2017. This game is compatible with every platform, including PlayStation, Xbox, and Gearbox. iPhone, iPad, Android, PC, and mobile devices are all supported.

The V-Bucks are the in-game money in the Fortnite game. Gliders emote, harvesting tools, back bling, loading screens, wraps, and costumes are among the cosmetics purchased using v-bucks. “Visualize the future,” says the game’s description of the Focus skin. This skin slot is for an outfit.

This skin was launched in Fortnite Chapter 1 Season 9 on July 12, 2019. The Focus skin is part of the Focal Point skin set, one of Fortnite’s skin sets. There are three cosmetics in the Focal Point collection. One is a Harvesting Tool (Fixation), the second is a Back Bling (Chuck Pack), and the third is an Outfit out of these three cosmetics (Focus). This skin’s character model is unknown. The character model in this skin has short white hair and is dressed in a dark grey suit with a mask on her face.

How to get focus skin in Fortnite?

Even though Fortnite receives a slew of new skins with each update, some have a reputation for being the pick of sweaty players. This generally occurs when a well-known professional player begins to use skin in most of their matches, causing the skin to spread like wildfire. Fans who want to play like their favorite pro do so by equipping the same skin and wreaking havoc in public matches, earning the skin the nickname “sweaty.”

Another aspect that influences a skin’s sweatiness is a rarity. Because they’re either no longer accessible or don’t return to the shop as frequently as the others, many sweating skins are tough to unlock. Before you head out for another Victory Royale, get one of the sweatiest skins in Fortnite to intimidate your opponents while also attracting the most deserving challengers. They want to put you to the test.

The Focus skin is part of the Focal Point Set, which is a Rare Fortnite outfit. This skin was first spotted on July 12, 2019, and the last time it was seen was on December 8, 2020. The Focus skin is available in a female aesthetic that depicts a mysterious-young woman. Why is she so enigmatic? That’s because she was wearing a white bandage and a black bandana with a painting of a large blue circle in the centre that completely covered her face.

She’s also wearing a short blue leather jacket with brown straps below it. She has a little shirt around her waist. She also wore a broad black belt with a large blue circle that encircled her entire torso. Her white hair is wrapped in a messy bun with a few strands dangling towards her face.

She also has two black straps on her right leg of her slim blue pants. She wears a pair of black boots to conceal his feet. Isn’t that a lovely sight to behold? The Focus skin, on the other hand, costs 1,200 V-Bucks. Of course, in order to obtain this skin, you must first purchase it from the item shop. Keep in mind that if the Focus skin appears in the Fortnite item market again, you should acquire it right away. If this skin vanishes, there is no way of knowing when it will reappear in the shop. Make sure to purchase it when it returns to the store.

Epic Games developed and distributed Fortnite Battle Royale, a free-to-play battle royale video game. It’s a follow-up to Fortnite: Save the World, a cooperative survival game with building components. On September 26, 2017, it was launched in early access for Microsoft Windows, macOS, PlayStation 4, and Xbox One, with versions for iOS, Android, and Nintendo Switch coming the following year. On June 29, 2020, Epic removed the game’s early access classification. In late 2020, launch titles for the PlayStation 5 and Xbox Series X/S were published.

The game’s idea is similar to that of earlier in the genre: 100 players crash onto an island and scavenge for supplies to protect themselves against other players. Players can battle alone (Solo), with one other player (Duos), three players (Trios), or in a party of four (Group of Four) (Squads). The playable region within the island steadily shrinks as the game proceeds, leaving the players with less and less room to work with; beyond this safe zone is “the Storm,” which inflicts harm on anybody trapped inside it, with the amount of damage increasing in tandem with the Storm’s growth.

The match is won by the last man or team still alive. The game’s building components set it apart from others in the genre, allowing players to create walls, barriers, and other constructions out of collected materials to protect themselves from oncoming fire or gain a strategic perspective advantage. Battle Royale employs battle passes to bring new character customization content as well as limited-time events, some of which coincide to changes to the game map. Several new game modes have been added after the game’s initial release, including “Battle Lab” and “Party Royale.”

In Fortnite 2020, which skin is the most sweaty?

The Pink Ghoul Trooper is the only skin sweaty gamers still use, despite the fact that initial owners of the Skull Trooper and Ghoul Trooper were granted unique designs. For starters, it demonstrates that they were active in the early days of Fortnite. Furthermore, it is a feminine skin, which many professional players like.

In Fortnite, who is the main focus?

Ruckus is one of Fortnite’s newest bosses. The inclusion of Ruckus occurs with Mandalorian’s involvement in Season 5. In order to finish the Besakar Quest, the players must overcome Ruckus. To accomplish this Mandalorian-themed mission, players must locate Ruckus Location in Fortnite and beat him to a pulp.

Use of rigid boxes for shipping has 6 advantages