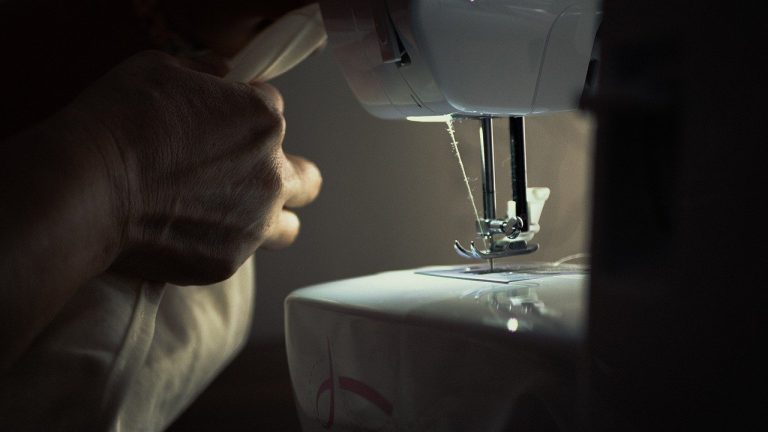 What is sewing machine?

A sewing machine, otherwise known as a stitch-forming mechanism, is an appliance that uses thread to create stitches used in the construction of clothing or other usable products. The two main parts are the needle and the bobbin. The needle carries the thread through to create stitches while the bobbin supplies new thread for each stitch.

The actual mechanics of how they work vary among models and brands but they all do essentially the same thing: they bring together two pieces of fabric at a time and move them along as it creates a series of interconnected loops on top with little holes underneath that draw up into a knot or “lock” above where they intersect. A few different common types of stitches exist, including straight seams which simply connect two lines of stitching together, zigzag for added strength and decorative purposes, and stretch stitches that can be used to sew elastic or other fabric with more “give” to it.

A bobbin is a small spool of thread inserted beneath the needle on most models. As the machine operates, the upper thread is passed through this area as well before returning up to the top tension disks to be knotted off. The bobbin supplies new thread after each stitch, meaning less time spent switching threads during construction. When not in use (and sometimes even when it is) the bobbin sits on a bobbin winder which can be rotated by hand or motorized depending on model.

The needle moves up and down within its sewing arm, creating either an open or closed loop of thread on the top side depending on whether the machine uses a zigzag or straight stitch, respectively. The needle itself moves between these states using its own set of gears which are powered by turning the hand wheel attached to it. This action also brings new thread up through the eyelet located at its base where it’s then drawn across to create stitches.

Types and Length of Stiches:

Most sewing machines today feature programmable stitching patterns that allow the users to select specific stitch types and lengths on either an electronic dashboard or mechanical selection dials with some models allowing both options. As well, many machines are computerized meaning they have internal memory chips that store every operation setting for one-touch recall later on if needed rather than having to re-enter them every time.

In addition to this, many machines have a drop-in top bobbin that allows for quick thread changes as well as a free arm feature which enables the user to fit the machine with cuffs and collars much more easily. The entire sewing head can also be removed from its base on some models for easy access underneath when attaching sleeves or trouser legs to bodices or skirts, respectively.

Most early sewing machines were manually operated using a hand lever connected directly to the needle’s foot plate though today’s models are almost exclusively electrically powered by both wall outlets and batteries depending on model type. Many come with integrated storage drawers for keeping accessories such as extra needles, bobbins, presser feet, screwdriver sets, etc.

How much does a good quality sewing machine cost?

How much does an average sewing machine cost? The prices vary depending on several factors but mainly on whether they are computerized or not. Some brands are known for their high end products while others are more affordable to cater to larger audiences, however in general most average over $200 USD in price which can range from about £100. 00.

What are some sewing machine brands?

Many different companies make sewing machines such as the Japanese company Janome, which is known for its high end products and reliability as well as having several celebrity endorsed models that sell at a premium, Viking of Sweden has earned an excellent reputation for offering highly customizable products with great customization options available.

At a steeper price point than others, include Singer, Brother Industries Limited is another popular brand in many parts of Europe due to their availability via numerous outlets both online and off, simplicity which is owned by the same company who owns Janome offers entry level machines along with all kinds of accessories while Pfaff specializes in computerized embroidery designs.

Read More: How To Stop Siri From Reading Messages On AirPods And Many More

How long has sewing been around for?

The first sewing machine was patented in the early 19th century by a French tailor named Barthelemy Thimonnier (1793-1857) and another French inventor named Thomas Stone (1780- 1856), however its development started much earlier as evidenced by Leonardo da Vinci who drew plans for one back in 1490. However, it wasn’t really until Singer later improved upon the design that true widespread production began taking off as he focused on making them more affordable and available to the masses.

Many people like how does a sewing machine work because it teaches them how to sew or they enjoy using these machines to create garments or other items. Many people even earn their living from working with sewing machines.

How did the sewing machine help advance society?

The sewing machine helped to advance society by making it easier for people to make their own clothes or items rather than having to rely on someone else which also led them become more self-sufficient. It also made it easier for companies to mass produce clothing items which are why many things today are manufactured in factories instead of being handmade in homes.

What is the most common type of sewing machine needle used for?

The most common type of needle used with modern day sewing machines is the universal sharp point needles that have an elongated eye and round point which can be easily threaded using a built in thread loop. They come in several sizes based on the thickness and type of material they will be used to sew through along with the number of layers.

Some also come with a special coating for added durability or to help prevent fraying. Another part is the presser foot which holds the material in place while it is being stitched, usually made out of plastic with metal threads embedded in it. There is also smaller sewing machine feet used for different purposes such as buttonholes, zippers, etc.

Even though machines seem boring and mundane, imagine life without them. Let’s take sewing machines as an example. Those endless, automatic cloth stitchers, thumping their needles all day long, are the ones who make all your fancy clothes, and the ones you do have wouldn’t be as cheap or decorative otherwise.